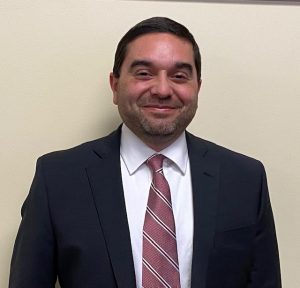 Mr. Trejo grew up in Ligonier, IN and attended West Noble High School. He attended Indiana Wesleyan University, and graduated with a Bachelor of Science in English Education in 1997. While teaching Middle School English in Texas, Mr. Trejo returned to school to obtain his Master of Education-Educational Administration from Texas State University in 2007.

While he was an administrator in Texas, Mr. Trejo was a mentor for new and aspiring administrators. He invested time in building leadership capacities in others and helping them become effective leaders, and eventually several went on to become successful assistant principals in other schools. He also challenged the Math, Language Arts/English, Foreign Language and Career & Technology Education (CTE) departments to look at and analyze their data to make improvements to their curriculum in ways that impacted and influenced how students performed in their classes.

Mr. Trejo also led several departments at the middle school and high school levels. A significant accomplishment for him was bringing the CTE department together as one group with one goal. He stated that the CTE teachers did not feel like they were fully a part of the faculty when looking at academic data to improve student learning. Over the course of two years, Mr. Trejo took reading and writing strategies from English 1 teachers and used the strategies to reinforce learning in multiple classroom settings instead of just within the English classrooms. Reportedly, CTE teachers loved taking the strategies and infusing them into their daily work. It helped the CTE teachers to feel more fully connected to their colleagues while also helping students strengthen their academic success.

Mr. Trejo has expressed a desire to motivate and inspire his team of teachers and staff to carry out the mission of Goshen Community Schools. He looks forward to leading his team using research-based and data-driven instructional pedagogy that will impact students, help them find their educational passion, and be prepared to contribute to a global community. Having been an assistant principal at the middle and high school levels, Mr. Trejo is committed to bridging the gap between the intermediate and middle schools so that students can move up knowing that they are prepared to meet the challenges awaiting them at the next level. He also intends to be an active member of the community, and to champion not only his school’s campus, but the school corporation at large by attending events, speaking with parents and community partners, and communicating the GCS vision. Mr. Trejo is bilingual, and welcomes conversations from parents, families, students, and business leaders in both English and Spanish.

Goshen Community Schools is happy to welcome Mr. Trejo to the GCS family and the corporation’s staff looks forward to the ways in which the Goshen Intermediate School and its teachers, staff, and students will grow under his leadership.